Just like humans, dogs are prone to accidents and illnesses that require medical attention. Dog insurance can be a great way to Reduce the cost of expensive vet bills and have peace of mind knowing your dog has access to the best care possible.

Find The Best Dog Insurance Plan
How Many People Have Pet Insurance?

In this post, we’re providing some pet insurance statistics, facts, and figures that reflect the state of the industry and demonstrate why you should invest in a health insurance policy for your four-legged friend.

How many American households own a dog?

69 million families, or 53% of US households, own dogs.1 That represents a 21.9% increase in dog ownership since 2000. Dogs are the most popular pets in the country, followed by:

What percent of pets are insured in the US?

The total number of pets insured in the United States is 3.1 million,2 approximately 2% of all the country’s estimated 87.9 million canines.3 While this number may seem small, the pet insurance market has been increasing at an average growth rate of 22.1% over the last five years And the total premium volume in the US amounts to $1.56 billion.2

How many dogs are insured in the US?

So, just how many of those pets have dog insurance in the United States? NAPHIA’s statistics on dog insurance show that 2,571,521 dogs have insurance, comprising 82.9% of all insured pets in the US.4 Dogs make up the majority of pet insurance policies purchased in the global market, as households across various countries consistently hold more insurance policies for dogs than they do cats.

How many pets are insured in Canada?

How many pets are insured in the UK?

Britain is another country known to love animals, with about 45% of households owning a pet as of 2018 for an estimated total of 8.1 million dogs and 8 million cats.5 According to ManyPets, 4.8 million pets are insured in the UK, a penetration rate of roughly 25%; This breaks down to 1.3 million cats and 2.8 million dogs with health insurance, along with 700,000 other species.6 Their data shows the average pet insurance claim has gone up by 75% over the last decade, leading to record-breaking payouts. As of 2019, British pet insurance companies pay a total of 2.2 million GBP in pet insurance claims every day.5

How many pets are insured in Sweden?

In 2021, there were more than one million pet dogs in Sweden, and approximately 90% of dogs have insurance.7,8 Although the Nordic country may be known for its free healthcare for humans, its strikingly high penetration pet insurance penetration rate is not due to public policy. VIN News reports Hundreds of thousands of Swedish pet owners voluntarily pay for dog insurance at an average price of $536 per annual premium. Animals have always been treated as family members in Sweden, where pet insurance was first introduced in 1924. Today, they still prioritize animal welfare with some of the strictest protections in the world, such as the 2008 rules that require domestic pets kept indoors to be within view of a sunny window.

How many pets are insured in Australia?

Australia has one of the highest pet ownership rates in the world. According to the Animal Medicines Australia (AMA) survey conducted in 2019, 62% of households owning a companion animal for a total pet population of 29 million — which is larger than the country’s estimated human population of 25 million.9 The AMA found Australian spending on pet insurance increased by 56% over the last three-year period. Yet data suggests only 7.1% of dogs have pet insurance out of the 5.4 million Australian dog ownersan estimate of 383,400 insured dogs.10 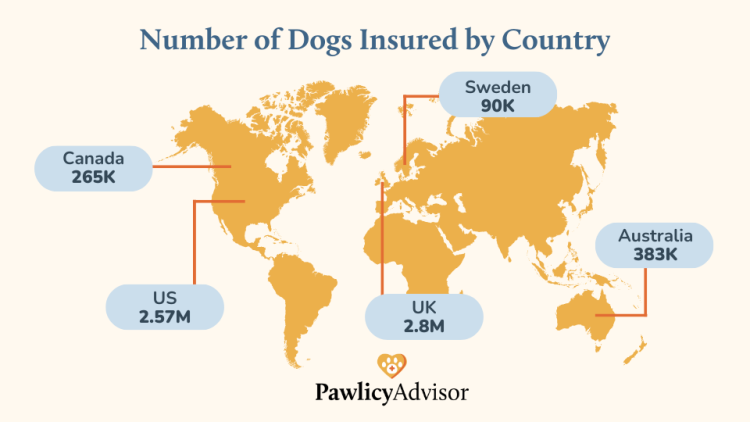 What’s the most popular type of dog insurance plan?

When do most people buy dog ​​insurance?

The average age of pet insurance enrollment is 3½ years old.12 The best time to buy pet insurance is when your pet is still young and healthy, before they develop a pre-existing condition that would be excluded from the policy coverage.

When Is The Best Time To Buy Pet Insurance?

How big is the pet insurance market?

How many employers offer pet insurance?

About 15% of US employers, including one in three Fortune 500 companiesnow offer pet health insurance as a voluntary benefit to attract and retain employees.14

Why Employers Should Offer Pet Insurance

Who is the largest dog insurance provider?

In 2020, Trupanion, Nationwide, ASPCA, and Petplan (now called Fetch by The Dodo) collectively held 84% of the US market.15th There are approximately 20 companies in the North American Pet Health Insurance Association (NAPHIA), which represents approximately 98% of the market.2 More and more pet insurance underwriters, administrators and carriers are entering the, however, competitive marketspace.

How much does dog insurance typically cost? 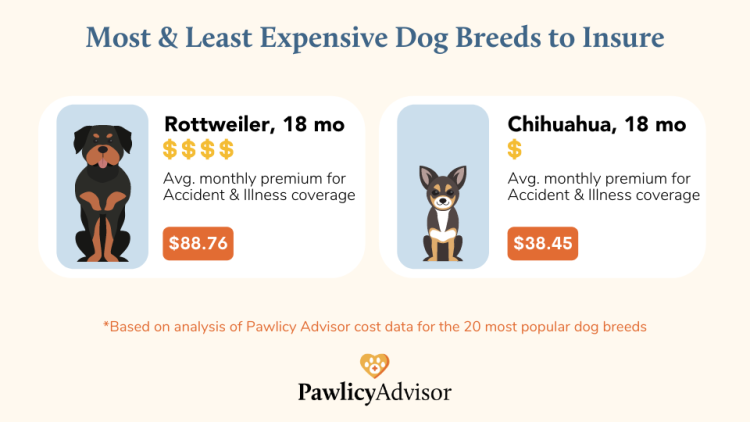 What’s the most expensive dog breed to insure?

Pawlicy Advisor analyzed cost data from the 20 most popular dog breeds in the United States and found Rottweilers to be the most expensive dog to insure at 18-months-old, averaging $88.76 per month for Accident & Illness coverage. In general, purebreds are more expensive to insure because they’re more prone to genetic health issues than mixed breeds.

According to Pawlicy Advisor’s data on the most popular dogs, Chihuahuas are the cheapest breed to insure at 18-months-old, averaging $38.45 per month for Accident & Illness coverage. Small dogs are usually cheaper to insure than large dogs because they tend to have fewer health problems. However, their longer lifespan could lead to more vet bills over time.

How much do dog owners spend at the vet per year?

On average, dog owners spend $242 on routine vet visits and $458 on surgical visits per yearcompared to cat owners who spend $178 and $201 respectively.16 Those who have dog insurance can get reimbursed for 70-100% of covered vet bills after they’ve met their annual deductible.

How Much Does A Vet Visit Cost?

Is it worth insuring a dog?

For most pet owners, dog insurance is a worthwhile investment as it makes sure they’ll be able to provide the care for their four-legged friend needs in case of an accident or illness. The cost of a vet visit can range from $500 to $5,000 depending on the service.16

Is Pet Insurance Worth It For Dogs?

What was the highest insurance payout for a dog?

The highest payout for a dog was $71,60317 for a large mixed-breed dog with cancer, whereas the highest claim payout for a cat in 2020 was $24,545 for a domestic shorthair cat with pneumonia.

What are the most common pet insurance claims for dogs?

About 50% of policyholders submit a claim each year.18 The most common pet insurance claims include:19

Where do people buy dog ​​insurance?

Many dog ​​owners consider their pet to be a family member, and a growing number of them are choosing to enroll in pet insurance. Insurance marketplaces like Pawlicy Advisor allow you to compare top providers, coverage details, and cost of plans to help you find the best protection for your pet. Pawlicy Advisor also provides personalized pet insurance recommendations based on your dog’s breed, age, and location, so you can quickly and confidently find great coverage at the lowest possible priced — guaranteed.